← A Small Moment in Bringing Up Baby
TV Tropes Looks at The Cabinet of Dr. Caligari →

Mindful/Playful | The Greatest Movie Ever Sold 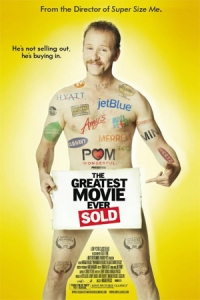 Morgan Spurlock, the king of documentary self-sacrifice, strikes again. Often, Spurlock brings smirking good humor to dangerous, perilous, and crucially important social issues. (He almost killed his liver for Supersize Me, for goodness sakes!) This time out, Spurlock brings that smirking good humor to a pervasive, if decidedly less directly dangerous, issue. In The Greatest Movie Ever Sold, Spurlock turns his insight to the world of advertising, marketing, and product placement. Spurlock starts with a clever conceit, and executes it cleverly – in short, he courts corporate sponsors to fund his documentary through brand partnerships and product placements, all the while demonstrating how this all works.

There was some mild critical disappointment in this movie. I would rate that disappointment not so much with the work itself, but as a measure of the weight that Spurlock’s other work carries. This film ultimately comes off as a light-hearted head scratcher at the weird state of affairs, not as a clarion call to question our evil corporate overlords. You can probably make a very serious argument that product placement in popular tv shows and movies contributes to the spike in childhood obesity, but it will be an indirect argument. Maybe greater transparency is the best we can hope for on this topic, and if Spurlock merely set out to bring us inside the boardrooms of corporate America as these brand partnerships are forged, he succeeded. If he set out to make us angry, I think he failed.

For me the greatest strength of this documentary is also its greatest weakness. The greatest strength is Spurlock himself. He brings his typical idiosyncratic personality and quirky humor to bear, as always. In this case, though, I suddenly feel very affectionate toward Pom Wonderful and Ban deodorant for being brave and open enough to associate themselves with Spurlock and his wacky ideas. I know, I know… it’s marketing and I just fell victim to it. But when Spurlock stands in front of storyboard featuring an over sized erection as he proposes that Pom promote the benefits of their product in combating erectile dysfunction, and the reaction of Pom Wonderful executive is NOT to toss him out of the room and take back their million dollars – well, I can’t hate them, can I? I guess I would expect corporate America to not particpate in such shenanigans with a wink and a nod, but then I watch them do it. It’s somewhat confusing. 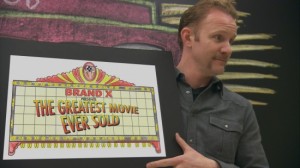 Spurlock pursues his own marketing and brand partnerships for the movie in the most theoretically sleazy way possible. In his attempt to generate “impressions,” he buys product placements on public school buses and fences. This should be really, really terrible and objectionable. But as you watch the nice ladies from the school district explain how they must balance ever deeper budget cuts against offering quality programs… well, you get the point. And the the money Spurlock’s spending will go directly to funding school programs , so sometimes product placement is a good thing.

All that said, I don’t want to harsh on The Greatest Movie Ever Sold. It’s is hilarious, and Spurlock is personable as always. While it might not be a pointed takedown of our evil corporate overlords, it is an illuminating look at a topic that is increasingly present in our lives and yet shrouded in a lot of ambiguity. As I watched Spurlock fret about compromising his own artistic integrity, I thought that he’s the only filmmaker even capable of taking on this kind of project. His whole gestalt is, after all, to put himself in harms way to explore a point. And who’s the say that ultimately wearing a Nascar like suit of product logos isn’t as dangerous as proving Big Macs will destroy your liver?

“I’m With the Brand” in Fast Company

“This Space for Rent” Q&A in Forbes

And be sure to watch Morgan Spurlock’s TED Talk
http://video.ted.com/assets/player/swf/EmbedPlayer.swf

← A Small Moment in Bringing Up Baby
TV Tropes Looks at The Cabinet of Dr. Caligari →