I am always happy when a new (to me) Humphrey Bogart movie appears in the TCM lineup, even if it’s a lesser known part of his filmography like Conflict (1945). And make no mistake, Conflict is a distant star in the constellation of classics in Bogart’s career. But this psychological thriller is a shining example of mid-forties noir films produced by an efficient studio and star system. It’s not the greatest movie made, but it’s worth watching. When you have a couple of Sunday afternoon hours to while away, there’s far worse company than Humphrey Bogart and Sydney Greenstreet to spend your time with. Oh, and spoilers ahead, if you haven’t seen this one.

In Conflict, Bogart plays Richard Mason, a successful architect and mid-life crisis haver. Richard has fallen in love with Evelyn (Alexis Smith), the younger sister of his wife Kathyrn (Rose Hobart). Unfortunately for all, Kathryn mocks Richard’s desire for her sister and vows to never, ever divorce him. Unfortunately for Richard, the couple is great friends with Dr. Mark Hamilton (Sydney Greenstreet) and his otherwise perfect crime is foiled by the psychologist’s keen insight into the human mind. 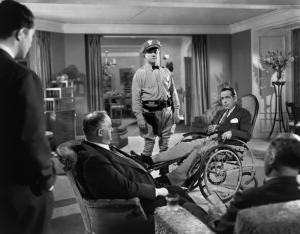 There are some serious plot problems in Conflict. The suspense of the movie revolves around Richard falling apart and beginning to suspect that his dead wife, the one he murdered on a lonely mountain road, isn’t really dead at all. But she is. I know she is, you know she is, we all know she’s really and sincerely dead. The movie does not suffer from fumbling the subtleties of creating suspense. It’s just very apparent from the get go how’s it’s going to play out. The only slip up Richard the murderer makes is noting to the police that Kathryn was wearing a rose when last he saw her. She was wearing a rose when he killed her, but not when he alleges to last see her. Of course, it’s Dr. Hamilton who gave her the rose, so twenty minutes into the movie we know what his downfall is and who will be responsible for engineering his confession and capture.

The second problem is the way Richard’s psychological disintegration unfolds. Those seeds of doubt about Kathryn’s mortality are sown, watered, and harvested by Dr. Hamilton. It’s an elaborately engineered ruse that requires the employment of a cast of extras – Kathryn’s stand-in, a pawnbroker, a landlady, the list goes on and on. Ultimately, Richard is driven to return to the scene of the crime where Dr. Hamilton and the police are waiting for him. This is not, in my understanding, how police work typically happens. It’s seems like a lot of effort to break a mundane domestic murderer. Since Dr. Hamilton knows about the rose, isn’t that enough for the cops to just arrest the guy? And since he’s trying to seduce his victim’s little sister, would the authorities really just let him run around willy nilly, possibly killing scads of women along the way? I don’t typically like to get hung-up on fantastical plot points (it’s a movie after all), but in this case the hole in the plot is the bulk of the movie. 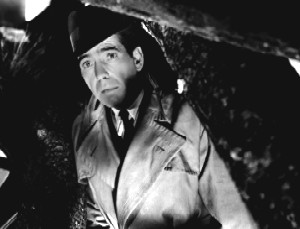 My third problem with Conflict is the little sister Evelyn. Ostensibly, Evelyn is the motivating factor for everything that happens. Richard wants her and kills to get her. But the character of Evelyn is a sylph, floating about the movie without the benefit of development or even presence really. Of course, film making wise, there’s no reason to focus on Alexis Smith when you have two titans like Bogart and Greenstreet, so that’s not really my problem. With a bit more effort, the screen writers could have made Evelyn as plot device very juicy. There’s a lot of be said about the thrill of the chase and the deliciousness of desire as counterpoint to the ultimate disappointment of obtaining the object of that desire. Bogey wants her bad, bad enough to kill, but then he’s all like, whatever. There’s a story in there, but sadly, Conflict lets that one slide.

What I do like about Conflict is the very noirishness of it, almost like eau de noir. Visually it hits all the right notes, and let’s shadows play about the sets and the characters in a delectable way. Even your typical B noir can offer up a stunning shot or two and Conflict does not disappoint. I’m thinking specifically of a shot during a tense car ride after Richard, Kathryn, and Evelyn depart a party. We see the back of Richard and Kathryn’s head, and the disembodied eyes of Evelyn reflected in the rearview mirror, hovering between them. It’s an intensely pleasurable moment of movie watching. And when Bogey steps from behind that tree on that lonely mountain road oozing ill intent and sinister-ness – sheer delight!

Say what you will about the Hollywood studio system or the star system, Conflict is a fine example of why I love “classic” movies. This movie is “pretty good” and feels so much weightier and solid than a “pretty good” contemporary movie. Conflict isn’t great, but it has a thoughtful and conscientious director, it has Sydney Greenstreet and it has Humphrey Bogart. That’s a lot of awesome things to have.