← Film Friday | Weekly Roundup
If I don’t get this Barbie… →

One of the distinct pleasures of watching silent movies is witnessing the birth of an art form. Techniques were not established, narrative forms were not structured, there was no such thing as trope. In watching silent movies, you can see the invention of all the things we now accept as standard not only from year to year and movie to movie, but almost from scene to scene. The Lost World (1925), the very first feature length animated film, does not disappoint on this level.  Loosely adapted from Sir Arthur Conan Doyle’s The Lost World, the movie was directed by Henry O. Hoyt and features pioneering claymation work from Willis O’Brien (the same O’Brien who will bring us much more perfected techniques eight years later in King Kong).

The plot is pretty thin. A group of explorers travel to the jungles of Brazil in search of living dinosaurs and previous group of explorers that were lost. With the exception of Professor Challenger, played with a perfect blustery ferocity by Wallace Beery, the characters are weak and ill drawn. We have a dashing explorer, a simpering heroine, a naive yet ambitious reporter, a myopic scientist, and a clever monkey. I didn’t care too much about this collection of characters, gave not a whit if they escaped from the plateau or not, and neither will you. The Lost World is not about the story or the characters… it’s about the dinosaurs. This movie is about spectacle, pure Hollywood spectacle the likes of which has become too familiar, and about honing a technical achievement. 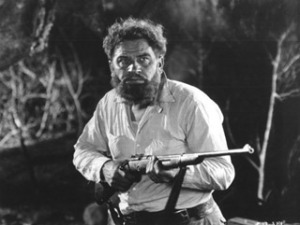 As I was watching, The Lost World I was struck by how thoroughly contemporary this movie felt. Add some synched dialog and it could almost be playing at your local cineplex this weekend. Truly, the movie is a well spring from which so much ensuing spectacle flows. If the above plot description and the idea of rampaging dinosaurs threatening people reminds you of a certain franchise of summer block buster movies… well you would be right. (I’ve never read Conan Doyle’s book, but does Michael Crichton owe him an apology?)  But my comparison does not rest solely on the actualization of fantasy or the degree of spectacle. The Lost World embodies a contemporary movie making ethos where plot and character doesn’t count, where a thin story is used only as an excuse for amazing technical feats and, again, spectacle. I suspect The Lost World wasn’t made quite so cynically, but there’s a hint of it.

Stipulating that The Lost World fails on the plot and character front, how does that spectacle fare? Pretty good, actually. Problems do abound, as may be expected in the first attempt at making dinosaurs again roam the earth, but all in all, the animations are convincing enough. The dinosaurs are a bit stilted and do not move “naturally,” though I’ve never personally seen a dinosaur run, but watch the brontosaurus laboring to breathe and you’ll be convinced as well. Again, given that movie goers in 1925 had never seen any dinosaurs in motion, my guess is that all they generously forgave any minor technical infallibilities. In terms of film making as such, the dinosaur scenes go on a tad too long and seem a tad too pedestrian, kind of like watching dinosaurs make dinner. But spectacle, spectacle, spectacle… the movie is about watching dinosaurs do stuff.

Now, in the end, when these explorers decide it would be a fine idea to haul a brontosaurus back to London to prove Professor Challenger’s assertion that live dinosaurs do exist, the contemporary view in me cringed. I know this is a terrible idea, you know this is a terrible idea – but the 1925 audience? Do they yet know that this hind of hubris will always lead to a rampaging dinosaur and smashed landmarks? I’m not sure if they do, but I hope it was surprising. And this is the moment in the film, with a bare five minutes to go, that the technical bravado pays off in The Lost World. The most irritating component of this movie to me was the lack of integration between the live action elements and the animations. We see people talking and the we see dinosaurs. We see live animals (weirdly, a collection of non-jungle animals like owls) and thee we see dinosaurs. It’s not until that brontausauras loses its shit and tears through London that the twain does meet. And it’s exciting when it happens, even in 2011. 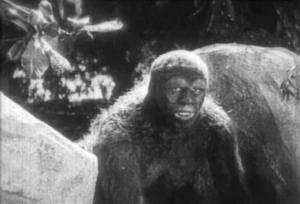 There’s a lot of things I didn’t mention here, like Jocko the Monkey (the second best character) and the entertaining if completely tangential man in the ape suit. There are some things that best to see for yourself.

The Lost World  long existed in a truncated 60 or so minute run time, but has been restored from multiple prints (eight, I believe). When looking for this movie, make sure you find the 9o-ish minute version or you won’t be having the most complete experience.

If you would like to read more about The Lost World, check out these links:

The Lost World is available for purchase on DVD at Amazon, as a download from iTunes, and can be streamed from Netflix (if you’re still on speaking terms with Netflix, that is).  You can also watch The Lost World on Hulu. The Lost World is on YouTube and at the internet archive, but only in the truncated 60 minute version. Check out the trailer while you decide where and how to watch:

← Film Friday | Weekly Roundup
If I don’t get this Barbie… →