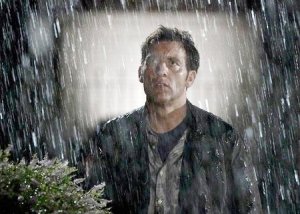 Juan Carlos Fresnadillo introduced Intruders at its TIFF premiere by saying, “It’s about how we create monsters when we’re kids, alone in the dark, and about how we pass those fears to the next generation. Fear becomes a legacy.” Intruders delivers on the potentials, large and small, in that statement. Not a “horror flick” in the gory slasher sense, nor a jump in your seat affair, the movie is a lyrical mediation on the origin of our fears and the dire consequences of allowing those fires to burn uncontrollably.

The plot unfolds episodically and follows two parallels stories, a young boy name Juan sometime ago in Spain, and a young girl name Mia today in Britain. Both children are terrorized by the same closet dwelling monster, Hollowface. Each child  conjures Hollowface from stories they tell themselves, “alone in the dark” as the director notes. But the threat becomes more real as the parents become involved. Juan’s mother seems to share his delusions as does Mia’s father. Viewers are left suspended in an ambiguous netherworld of understanding that there is a threat yet not understanding exactly which quarter it comes from.

Typically in these kind of ogre-under-the-bridge fairy tales, love is a talisman that provides not only solace, but protection and passage. In Intruders love, specifically the fierce love of a parent for a child, is a far more complicated affair. The profundity of that parent-child connection is underpinned by an electric current of fear – fear of the unknown, fear of loss, fear of damage. Intruders asks the question, “When does that fear become more harmful than helpful?”

While the movie seems to veer into supernatural territory, the narrative is ultimately rooted firmly in reality. Intruders illustrates the danger of dealing with fear by avoiding and obfuscating, thereby creating a far more slippery and unkillable beast. While you can watch this movie as a taut, psychological thriller, a ripping good yarn, it’s difficult to ignore the broader references to our current climate of fear. The message is clear – the only way to banish the bogeyman beneath the bed to address how he got there.

The release date for Intruders is October 7, 2011. In the meantime, watch the trailer: