In thinking about choosing my tix for TIFF 2011, I knew I definitely had to hit one of the Short Cuts Canada programmes for two reasons. The first, short films strike me as quintessentially film festival-ly. Watching a short film is often like peeking into an artist’s sketchbook. You get the opportunity to see a new technique being explored,  or a narrative in its infancy. Sadly, short films struggle for outlet and film festivals are it. My second reason is the shorts at TIFF are all Canadian, and I’m still trying to pass. It was important to me to hit some specifically Canadian screenings this go round.

So my logic in choosing Short Cuts Canada was sound and the decision paid in spades. All of the shorts were interesting, one was just fantastic, and one might be the most eloquent and beautiful film I’ve seen since I first watched F.W. Murnau’s Sunrise. Here are the highlights” 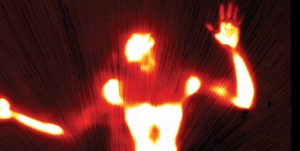 The TIFF program describes Ora as a game changer. I’m not sure I would go that far,  but it is novel. Ora was shot on an infra-red thermal imaging camera in 3-D. That’s a mouthful, but the result in visually intriguing. The only light source in Ora is the body’s own heat. Modern dancers work their way through some bodily contortions, leaving behind smears of heat and body imprints. It is absolutely gorgeous. However, it was also kind of dull. Perhaps its a symptom of an over stimulated contemporary mind, but the novelty wore off in about  three minutes. The technique and the technology offers a lot of promise though, and Ora is definitely worth seeing.

This is the film that ultimately landed me in Programme 6 of Short Cuts Canada. The Red Virgin is a taut, intense, and intensely stylized study of the most contentious relationship in the known universe – that between a mother and her daughter. The story is told in 3 thematic acts – Love, Fight, and Murder. Which sounds about right if you’ve ever been a daughter to a mother or a mother to a daughter. Often short films go wrong by being too ambitious, but trying to tell a feature length story in mere minutes. The Red Virgin side steps this issue by going big instead of small. It’s a broad point this eternal mother-daughter warfare, but The Red Virgin hones in on the emotional conflict and relies on the impact of visual styling rather than exposition. And you’ll be chilled to the very bone when mama deadpans to the camera, “The sculptor, after discovering minimal imperfections in his work, destroys it.”

And what to say about Trotteur? My notes say this: Jesus, this is gorgeous. If SSC 6 was screening again, I would shell out full fare just to relive this eight minutes and change. Trotteur does not shy away from narrative in the way that The Red Virgin does. Rather, it pares a narrative down to its bare elements – this is the conflict, this is the resolution. We have a young man, abused and ostracized by vicious children, who believes he can outrun a train. The village looks on, perhaps mockingly, and they all know, as do we, he can’t possibly win. The bitter irony is of course that all of these people will lose this race and that belching, snorting, fire breathing mechanical beast will beat everyone in the end.

Trotteur is a visual feast. The cinematography, in glorious black and white, simultaneously demonstrates the barrenness and the beauty of the winter landscape. There is no dialogue. There is no exposition. There is a boy and a machine and sheer will, both mechanical and human. In his review of this year’s silent film novelty The Artist, Chris Edwards at Silent Volume wishes for a “a silent feature that isn’t about its own silence, or the Silent Era, but simply about something else.” I wish for the same thing, and I nominate Trotteur’s director Arnaud Brisebois for the job.

If you have the opportunity to catch Trotteur somewhere, do so without hesitation. You can watch the trailer here, but I warn you that a low-res video viewed in a tiny window will not do this beautiful film an ounce of justice.

Posted in Modern Times, My Reviews